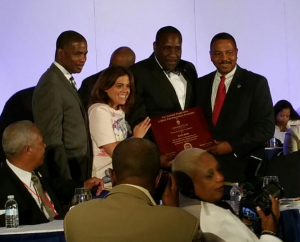 Capt. Stith was honored recently at NOBLE’s 40th Annual Training Conference in Washington, DC. NOBLE’s Mentoring Potential CEO program began in 2016 and to date there have been 21 graduates of the program, 13 who have gone on to become police chiefs. It is a two year training program which includes a series of courses and workshops, and also having the trainee paired with a mentor. Capt. Stith’s mentor during his two years in the program was Atlantic City Police Chief Henry White.

According to Patrick Oliver, a retired police chief and the director of the mentoring program, “Capt. Stith has been an outstanding protégé.”

NOBLE began this training program in 2006 for law enforcement officers who aspire to become CEO of a law enforcement agency. The program is run by Cedarville University in Ohio, and, according to Oliver, it is an extremely selective program with participants needing to meet a long list of pre-requisites.

When asked about his experience, Capt. Stith said, “Under the leadership of Patrick Oliver and the support of Prosecutor Esther Suarez and Acting Chief Gene Rubino, I completed this law enforcement professional mentoring program that has prepared me for the next phase of my career.”

Prosecutor Suarez and Chief Rubino were present in Washington, DC for Stith’s graduation ceremony. “The entire office is proud of Capt. Stith for taking this step in his professional career and we wish him the best in his future endeavors,” said Prosecutor Suarez. “Because of his professionalism, every day, he is an attribute to this office and to the citizens of Hudson County.”